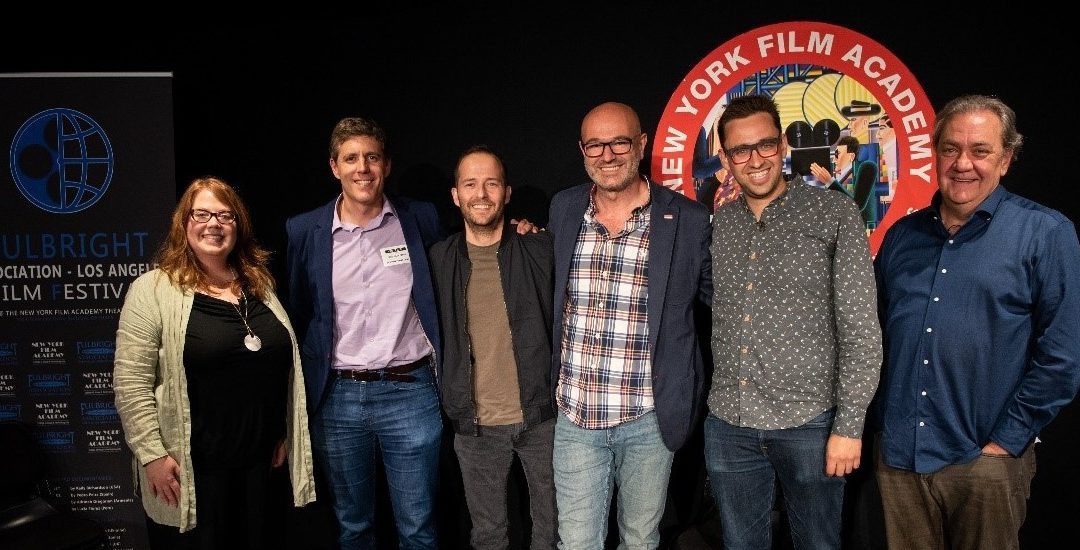 The Greater Los Angeles Chapter of the Fulbright Association held its Fulbright Film Festival on May 4th, 2019. Held in collaboration with the New York Film Academy College of Visual & Performing Arts (NYFA) and supported by the Bureau Of Educational And Cultural Affairs Of The U.S. Department Of State, the Fulbright Association – Los Angeles Film Festival showcased extraordinary films made through the creative contributions of Fulbrighters. After months of planning, and thanks to the efforts of volunteers across the state, the 8-hour festival was a resounding success. 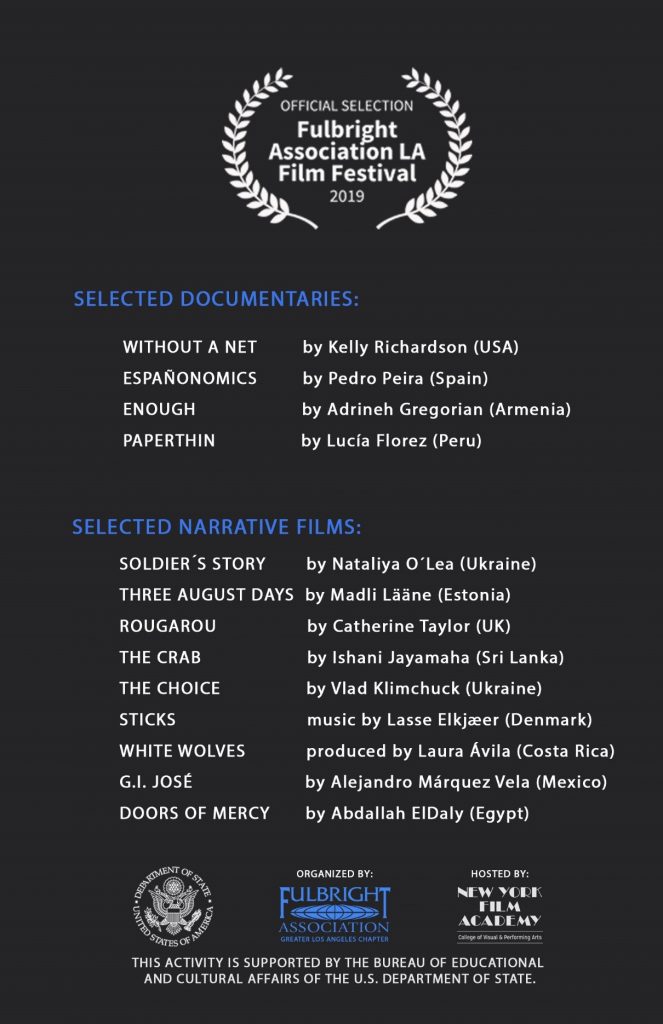 “This is an activity that has been in our minds for the last couple of years,” says Chapter board member Miguel Cruz, who organized and curated the event. Miguel is a Spanish Fulbright alum and is himself a successful film and television director. “Being as Los Angeles is the capital of the media industry, an event that presented the work of Fulbrighters to the Hollywood industry seemed a natural and necessary event in the Calendar of this town. The fact that the New York Film Academy counted already with a remarkable body of work of our many Fulbrighters, and their support and know-how in the organization of this kind of event, made it easy to give the necessary steps to organize it.”

Held at the New York Film Academy Theatre, over 100 Fulbrighters and friends attended to celebrate the accomplishments of fellow alumni in the film industry. The festival featured a range of films directed, produced, or contributed by Fulbright grantees and alumni from all over the world, including Sri Lanka, Peru, Estonia, Ukraine, Spain, Mexico, Armenia, Costa Rica, Denmark, and the United States – each with a unique theme and style that represented the diversity of Fulbright.

Dr. Jose Siles, President of the Greater Los Angeles Chapter, and Dr. Susan Ashe, NYFA’s Dean of Students, offered opening remarks. “It was extremely inspiring and touching to see how the vision of Senator Fulbright of promoting mutual understanding among people from different countries, cultures and social backgrounds was so well reflected and empowered by the work of our Fulbright filmmakers,” says Jose.

In addition to showcasing films, the festival held a special panel discussion, “Hollywood for Fulbrighters”. The panel included Fulbrighters Santiago Pozo, who is known for his work in advertising for marketing entertainment and film to U.S. Latino audiences, Arturo Diaz, the Netflix Executive for Latin-American Originals, Mikko Alannen, a showrunner for the National Geographic Channel, and Miguel Cruz, who directed the sitcom “Aida” and the film “Vulnerable” and is head of NYFA’s Fulbright Initiatives. Under the moderation of Crickett Rumley, NYFA’s Director of Festivals, this panel opened discussion on how Fulbright offers diversity and intercultural perspective to the film industry.

The festival finished the evening with a reception, where Fulbrighters and NYFA students had the chance to share their own experiences and thoughts on film and Fulbright. They were joined by Fulbright representatives including Ann Kerr, who is California’s Fulbright Enrichment Program Coordinator, and Manuel Valle, a Spanish Trade Commissioner.

“The movies were the best ambassadors of the Fulbright values,” says Miguel. “Their origin: 12 different countries. Their themes: diversity, acceptance, understanding, overcoming injustice, and inequality. The deep silence in the room demonstrated the wonderful minds of the artists behind the meaningful topics treated. Only a Fulbright Film Festival could put together such a relevant selection of movies!”

The Greater Los Angeles Chapter plans to keep the momentum going with future events, including their upcoming annual Fulbright Association Members Reception and a Fulbright Night at the Opera. The chapter is also planning another exciting new event: in celebration of the 238th birthday of Los Angeles, they are planning a Fulbright Music Festival, which will share the message of Fulbright through music.

Those interested in joining the Greater Los Angeles Chapter can officially enroll by logging in to their accounts. To view our full chapter network, please click here.